Dependant on what you may be towing, you have options on the socket type you choose.
By Registration

When ordering a towbar to be fitted you need to decide which type of towing electrics that you will need.

There are 3 types of towing electric socket used in the UK.

The type of socket that you need depends on what you are towing.

Whether you are towing a large caravan, or just using your towbar to support a cycle carrier, you will need some electrics with your towbar.

It is a legal requirement to have lights on the rear most point of your vehicle. 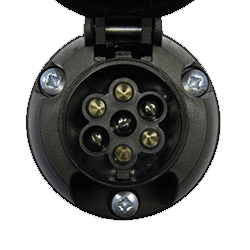 Single 7 Pin Electrics also known as 12(N), are fitted as standard with any towbar.

They provide power from the towbar to the lights on a trailer or caravan. If you're only going to be towing a trailer this is all you need.

You can tow a caravan using only single electrics, but the interior functions of the caravan, such as the fridge, wouldn't have power to them.  You would  need an adaptor if your caravan has 13 pin electrics.

Even if you will only be using the towbar for a cycle carrier we recommend that you still have a single electric socket fitted so that you can power a light board over the bikes.

Twin 7 Pin Electrics, also known as 12(S), are fitted in addidtion to single 7 pin electrics if you're going to use your towbar for towing a caravan built prior to 2008.

The extra grey socket provides power to operate the interior functions of the caravan such as the interior lights, run the fridge and charge the battery while you are towing.

This type of socket has been replaced on caravans built after 2008 in the UK. New caravans now use the 13 pin standard socket shown below. 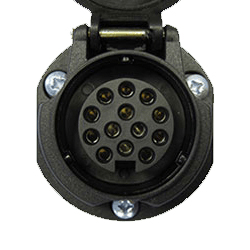 13 Pin Electrics have been standard in most other European countries for some time.

This is replacing the 2 separate socket currently used in the UK. The 13 pin socket is essentially the two 7 pin sockets merged in to one.

All caravans manufactured in the UK from 2008 are fitted with an ISO 13 pin connector as standard. This system uses one socket with 13 pins inside, instead of the traditional two separate 7 pin sockets.

13 pin sockets are also used on some vehicles especially with detachable towbars when there isn't enough room to mount two separate sockets behind the bumper.